The Sudden Loss of Silence 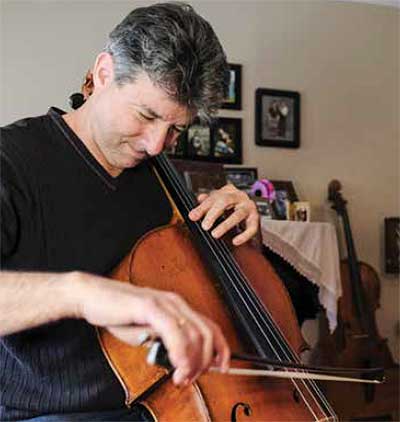 I’m a professional cellist who has spent over 30 years teaching and playing in Houston, TX, without much worry about my hearing. Like other musicians, my primary concern has been overuse syndrome—in my case, my arms—due to the long hours of rehearsal and performances. That all changed July 29, 2015, as I stood in my brother’s garage shell shocked by the deafening explosion of his misfired gun. I was visiting him in Arizona, and we were having a great time until that moment.

Despite my confidence that the loud ringing would stop in a few hours, that wasn’t to be the case. Oddly, my brother’s hearing is fine.

As my wife and I continued our summer travels, I kept hoping for the best. Days, weeks, months, and now years have passed with no respite from the loud ringing. It’s a strange injury, because there are no wounds to see. People just don’t understand it.

That September, when I returned to play in the orchestra pit of the Houston Ballet Orchestra, I was thunderstruck by a new problem, which I would later learn was called hyperacusis.

Despite the loud ringing, I could play in tune. Things seemed OK until the brass section came in loudly, causing distortion in my ears that prevented me from hearing my instrument and the others in my section. It was very distressing.

The hyperacusis has changed other things as well. I love to talk to people, but it’s difficult to carry on a conversation in a loud environment like a party or restaurant because of it.

That fall, I went to an ENT for help. He checked my hearing and found it within normal range, despite the fact that I was now constantly asking people to repeat themselves.

He was a young doctor working for a well-known physician, so I trusted his competence. I left with a one-week prescription for the steroid prednisone, which was intended to stimulate the little hairs in my inner ear.

After a few days I felt great, then the prescription ran out. I was in the middle of a performance when I felt so bad that I had to run out of the pit. I later learned I was experiencing 12 out of 13 of the side effects for withdrawal from prednisone. The doctor had called my treatment a “burst” because of its short duration, and had never heard of a reaction like mine. I found that dubious, and moved on.

My stand partner gave me the name of another doctor who had helped her friend with tinnitus. That doctor basically said, “You’ll just have to learn to live with it.” Determined to find a cure, I asked for a referral. She gave me the name of another doctor who evidently had a 50-percent success rate in treating tinnitus patients by injecting steroids directly into the inner ear. After hearing my story, he said the treatment wouldn’t work because my tinnitus was sudden onset, not gradual. “Besides,” he said, “injecting steroids into your inner ear hurts like hell.”

I tried hearing aids with masking features but couldn’t get used to them. Nothing helped.

I came to the realization that I would never enjoy just silence. Silence can be almost as beautiful as the music itself—the rest between notes is just as important as the music. The tinnitus also interferes with hearing the softer sounds, so I can’t enjoy that either. That’s the maddening part.

Last summer, I hiked up a mountain in California and didn’t think about the tinnitus, from morning till afternoon, because of the high winds. The wind blotted it out.

The noise, which I liken to the high-pitch buzz of cicadas, is so unsettling. When I wake up, I relive the trauma of that day and wonder what I could have done differently. I have sort of forgiven my brother for that gross misjudgment that day. But, there’s nothing I can do at this point, which is the problem.

My treatment is staying active and busy. I can’t be still. My wife, who’s a violinist, had hoped we’d be slowing down as we move toward retirement. I can’t—I have to keep going to do something with my ears to take my mind off the constant ringing.

I decided to share my story with ATA because the patient stories in Tinnitus Today have given me hope and make me feel like I am not alone. I hope my story helps someone cope with what they’re going through.