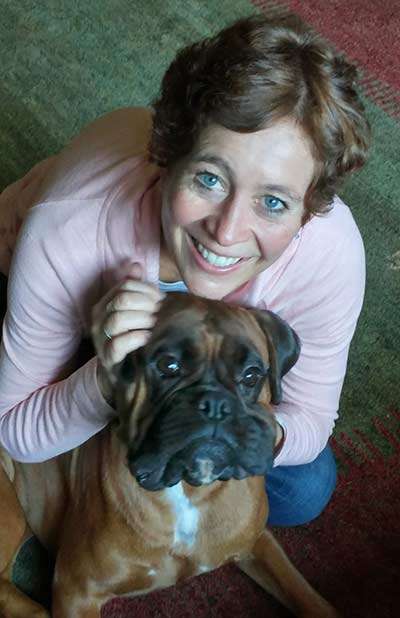 In 1992, at the age of 21, I contracted acute bacterial meningitis. This left me deaf in my left ear, with vestibular issues that made walking difficult, prone to minor epileptic seizures, and with overwhelmingly intrusive tinnitus. I clung to the thought that I was lucky to be alive, never imagining that there would be a mental health toll from not acknowledging the many obstacles I faced and from the burden of my self-imposed silence about living with tinnitus.

Initially, I had double vision and could barely see, which made learning how to walk even more difficult. The optic nerve was eventually restored, so I could see. However, such milestones felt bittersweet because of my hearing loss and the relentless tinnitus.

I had learned early in childhood to suppress difficulties, because my mother was diagnosed with a terminal illness when I was 13. Watching her and wanting to provide comfort, I kept my troubles and worries to myself. When I contracted bacterial meningitis, I again concealed my problems from her, because her quality of life was so limited.

As soon as I was able, I returned to university, dove into my studies as best as I could, and rarely mentioned my health struggles to anyone. In 1994, my university research in international development took me to Guatemala, where I met my future husband, who is Canadian.

However, my tinnitus was negatively affecting my professional and private life. Within months of my return home to the Netherlands in 1995, my ENT specialist suggested labyrinthectomy, a procedure sometimes used to decrease vertigo.

The theory behind performing the labyrinthectomy was that hair cells were still trying to “broadcast,” and, by killing the remaining cells, the tinnitus signal would cease. Although I knew the chances for improvement were limited, I still had hope. Therefore, I was very disheartened when the surgery failed to alleviate my tinnitus. At that point, I resigned myself to the fact that this condition would be lifelong.

At 25, I moved to Vancouver to be closer to my future husband. Living in a new country as an immigrant had its own challenges. I worked hard and landed a job at an international think tank. The work was exciting, but very challenging from an auditory perspective. My area was Latin America, and I was responsible for project implementation. This meant I worked with large groups translating between English and Spanish. My brain worked overtime, functioning in two languages, neither of which were my native tongue. Every day, I gave 100 percent of myself, so no one knew I had a problem. I exited that high-pressure job several years later, when my husband’s work took us to Ottawa, Canada.

A few years after that, we moved overseas to Belgium for a number of years. When we returned to Vancouver, I co-founded a business with the objective of having a healthy balance between work and family. As usual, I kept silent about my hearing loss and tinnitus. My only confidants were a few close family members.

Unwittingly, I had become adept at compensating for my hearing loss and tinnitus. I wasn’t shy or ashamed; it was just easier to adapt to and suppress the additional stress they created.

In May 2009, my third child was born. As for all parents with a newborn, life became more hectic and less predictable. My children were the source of so much joy and so much activity that I failed to grasp that tinnitus was gradually destabilizing my mental well-being. The proverbial straw that broke the camel’s back was a freak accident that severely injured one of my children. That day, my mind began to unravel, despite the fact that my child would fully recover.

My mental strength and physical energy were so sapped that it took tremendous willpower to get through each day. The sound of tinnitus was overwhelming; and each day, feelings of self-doubt, fear of losing control, guilt, irritation, low self-esteem, and anger penetrated everything. I could feel myself pulling away from people and entering a world of mental exile, where I was defined and controlled by tinnitus.

In late 2017, I was determined to make a fresh start and get my life back on track. I stepped away from my business. However, divesting myself from the company was more difficult than anticipated. It proved to be the tipping point. I had a nervous breakdown by the end of the year. It felt like the walls of my mind crumbled, leaving me trapped with the noise of tinnitus.

I sought help and was told that if I wanted to get better, I needed to stop suppressing my problems and emotions in order to identify underlying patterns of behavior. Once I understood the coping mechanisms that were adding to my stress, I could recover the life and joy I craved.

Living for decades under self-imposed silence about my hearing loss and tinnitus was a significant part of the problem and a major piece of the puzzle to solve. The recovery process enabled me to understand the counterproductive coping and masking mechanisms I had developed unconsciously from a young age because of my mother’s illness, her death, the death of my father, and the constant moves that kept me from establishing roots that might have provided better support. Self-care, let alone verbally expressing my daily challenges, was not a concept in my repertoire. My silence had finally exacted a heavy toll on my ability to simply get through a day.

Since my breakdown, I have come a long way on the road to recovery. I know I will emerge as a stronger, more complete version of myself. After more than a quarter of a century, I am finally acknowledging and dealing with the challenges unleashed by that devastating infection, including how to live with tinnitus.

I now wear contralateral routing of signals (CROS) hearing aids, which are designed for people with single-sided hearing loss. The hearing aid on my deaf ear transmits sounds to the ear with better hearing, making it easier to hear. It also decreases my perception of tinnitus.

I meditate daily and am trying direct neurofeedback, a therapy that uses electroencephalography (EEG) to help me gain control over my brain activity. Using imperceptible low-voltage signals, the therapy attempts to disrupt repetitive negative neural patterns and establish healthy ones, resulting in an improved mental state. It’s like rebooting a frozen computer.

I also committed myself to eye movement desensitization and reprocessing (EMDR) therapy, which is an interactive psychotherapy technique used for the treatment of trauma. (See box.)

During EMDR therapy sessions, you briefly revisit traumatic or triggering experiences while the therapist directs your eye movements. For me, the meningitis and the sudden onset of tinnitus were very traumatic. Through EMDR, recalling these traumas became less emotionally upsetting. It allowed me to explore the memories and thoughts without having a strong psychological response. Over time, it helped reduce the tinnitus distress.

EMDR, meditation, and neurofeedback have helped me tremendously in my ability to move my attention away from the sound of tinnitus. It’s like having a mute button that allows me to shut down feelings of anxiety and the fight-or-flight response that accompanies it.

Through meditation and mindfulness, I now am able to separate myself mentally from the constant static noise in my brain instead of being enveloped in it. This simple act of observation is so powerful that I feel free and in control.

Tinnitus has done nothing to improve my life. But, like many life challenges, it inadvertently gave me strengths, such as compassion and empathy. It has taught me profound lessons about the invisible and often unspoken world of mental health, which affects millions of us directly and indirectly.

The heavy weight of silence eventually broke my spirit, whereas communication and support reopened the world of hope and broad horizons. Learning to become comfortable talking about and acknowledging hearing loss, tinnitus, and mental health issues has allowed me to proactively adapt and evolve. Trying to endure alone meant that I delayed getting better.

Think about the concern we express and feel when a friend breaks a leg or has a serious illness. “How is your leg?” “How is your recovery going?” We’re eager to hear about their situation. But what about friends struggling with depression or tinnitus? For some reason, we would never ask, “How is your mind healing?” “Is your tinnitus making you crazy?”

Through communication and dialogue, mental isolation and loneliness disappear. You suddenly discover a whole community of people you didn’t even know existed; people who appear well and whole reveal things about themselves that you had no inkling of. They, too, were suffering in silence, perhaps out of fear or shame.

I learned, much to my astonishment, that when I talked about my pain, my loss, my struggles, I was greeted immediately with empathy. More often than not, someone else has a similar story. We are not alone, but if we don’t talk openly about tinnitus and the many issues that it can trigger, we feel alone. So, please, speak up and seek help for yourself, a friend, or a family member, so they never hit that awful tipping point like I did.

Desiree Kranendijk was born and raised in the Netherlands. As a young adult, she embarked on an international career in project design and management. She currently resides in Vancouver, Canada, with her husband, three children, and loyal dog. She enjoys the great outdoors, making road trips to U.S. national parks, and sharing food and wine with friends and family.