The Search for the Elusive Cure for Both Lyme and Tinnitus 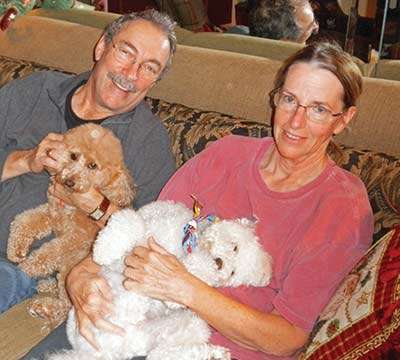 Long before Lyme disease became a household word and increasingly important public health problem, Kathy Olson knew its ravages first hand. “I’ve had chronic pain since I was 16 years old, but nothing ever pointed to a reason in test results,” she explained. That changed in 1995, when a blood test came back positive for Borrelia burgdorferi, the bacteria that causes the infection known as Lyme disease.

With a name attached to her illness, Olson expected to be cured. That was not to be, as other infections unleashed from that initial tick bite proved to be stronger than the drugs prescribed to beat them.

“The pain is ongoing and nothing explains it,” she said. Despite that, she remained upbeat. Today, more than 20 years since her diagnosis, Olson is part of a small clinical trial using stem-cell infusion to boost her immune system’s ability to combat infections. As part of the treatment protocol, she stopped taking all medications, most of which were holistic. Right before starting treatment, tinnitus entered her life.

“It was February (2017). I was in the car with my husband, when I asked him, ‘Do you hear that high-pitched noise?’ I thought it must be the air-conditioning. He turned it off, but the noise never stopped,” she said. Her family doctor thought it was water in her ears, so she was referred to an ear, nose and throat (ENT) specialist. Deciding inflammation was behind the high-pitched buzz, the ENT scribbled a three-week prescription for prednisone and assured her it would go away.

When the prescription ran out and the buzzing continued, Olson made an appointment with a well-regarded ENT, who specialized in tinnitus treatment, in Bethesda, MD. “He was the least sympathetic,” she said, recalling how stunned she was by his comment that she “learn to live with it.” “There was no compassion,” she said.

Within weeks, she was overcome with anxiety. “I thought the tinnitus would go away. Now I’m afraid it won’t,” Olson said, explaining that she had never experienced anxiety or depression prior to the onset of tinnitus.

With the support of her husband, Mark, she began searching for more comprehensive help and is participating in the Tinnitus Retraining Therapy (TRT) program at the University of Maryland Tinnitus & Hyperacusis Center in Baltimore, MD, as a complement to the stem-cell infusion trial, which is being conducted separately at a private practice. The center runs a three-stage program that starts with an overview session with an audiologist who outlines the nature of tinnitus and hyperacusis.

“We were instructed to bring support people. Out of five (people attending), I was the only one who had a support person with them,” she said.

The second stage is a comprehensive hearing exam, which measures such things as the severity of tinnitus, which then determines the direction of the third stage of TRT. When that exam is complete, Olson will receive a treatment plan.

The TRT model is based on the premise that various parts of the brain are involved in the tinnitus signal, with the cochlea and auditory systems playing a secondary role. The treatment aims to facilitate habituation through counseling and sound therapy.

In addition, Olson is working with her audiologist, who also is new to TRT, in a one-year clinical trial that involves using hearing aids with masking to measure the effect of white noise at two different levels. “So far, it hasn’t helped,” she said, noting that every therapy requires time, which has aggravated her fears.

To quell the anxiety, she is seeing a cognitive behavioral therapist and psychiatrist. Cognitive behavioral therapy (CBT) has been shown to help mitigate tinnitus, so Olson is determined to make that work. “You can’t interrupt training once you begin, so I’m starting when I return from vacation,” she said, explaining that the trip was planned prior to the onset of tinnitus.

To help her enjoy the holiday, her therapist suggested that she use the Headspace app, which features guided meditations for all levels and can be found at www.headspace.com. “It’s a British guy talking you through meditation. It’s a good place to start,” she said. Stop, Breathe & Think, which can be found at www.stopbreathethink.com, is the other app recommended to help her feel at peace. “The CBT is eight-to-10 weeks,” Olson explained, adding that she hopes the therapy will enable her to stop taking antidepressants. “Right now, that’s a safety net.”

Though Olson is at the beginning stages of learning to cope with tinnitus, she has done everything doctors suggest to habituate, from being seen by qualified medical specialists and exploring a variety of therapies to attending tinnitus support groups. She credits her husband for helping her stay focused on finding answers and getting better. And, once the tinnitus is less bothersome, she hopes to finally rid herself of the vestiges of Lyme.