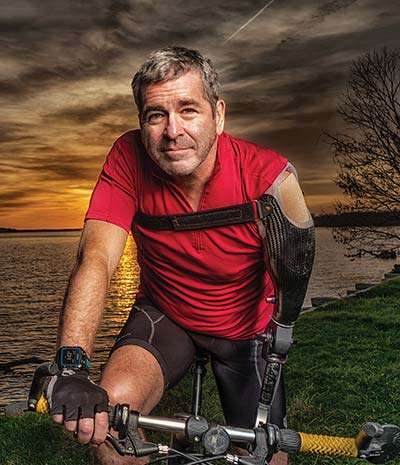 After several bad crashes on his bike, Miles O’Brien figured out the best way to ride. He lost his arm in February and in June rode 300 miles in two days across Michigan. Photo Credit: Vincent Ricardel

Miles O’Brien, award-winning journalist and PBS NewsHour science correspondent, suggests lightheartedly that having tinnitus in some ways prepared him for being an amputee. “To the extent that there’s a certain mindset [about the condition], then maybe so,” O’Brien said in a recent interview. As a globetrotting journalist, he manages bothersome tinnitus by staying constantly engaged with work. But staying constantly engaged with work as a globetrotting journalist with one arm poses challenges that can’t be ignored. Like with tinnitus, he uses tech tools and pays close attention to attitude so that neither condition interferes with living the life he wants.

Comparing the phantom sound of tinnitus with the phantom pain of an amputated limb echoes O’Brien’s reporting for PBS NewsHour in 2013 on tinnitus: “They were comparing the [tinnitus] research to analogies of phantom limb pain because there’s this missing patch in your brain [for hearing sound] and your brain is trying to fill in the gaps,” he explains. “Now I’ve got tinnitus and phantom limb, so I guess my brain is consistent,” he says lightheartedly. Lack of answers about tinnitus, however, clearly bother him. “I was floored that there was nothing out there to make it go away. They don’t even want to talk about tinnitus. I had [doctors] say, ‘I can’t hear your tinnitus. I’ve got nothing for you.’ That sucks,” he says.

O’Brien has high-frequency hearing loss, which he attributes to many years of hunting and flying small airplanes without proper ear protection. He recalls that his tinnitus started during a hunting trip in Idaho about 12 years ago. To reduce the sound, O’Brien was fitted with hearing aids equipped with maskers. “I found the hearing aids helpful,” he says, adding that the maskers generating white noise were useful in covering the tinnitus. But, for the most part, O’Brien’s most effective technique for dealing with tinnitus on bothersome days is to focus on external sounds. “I put on music or put on the news.”

O’Brien’s fearless attitude, persistence, and affinity for change help him overcome mental obstacles that can hinder others bothered by tinnitus. “It could be much worse,” he says. “There’s so much to it and it’s unfair for me to project [my situation] onto someone else because everyone has their own battle.” He applies the same power-through-it approach to his second health condition, which could have sidelined his career.

You might imagine that O’Brien, a former CNN anchor, jets first-class around the world with a team of assistants, reporting on science and environmental news accompanied by an entourage. In actuality, he is a cost-cutting independent reporter who knows how to fly an airplane, wield a camera, and produce his own segments. The accident that caused his arm to be amputated above the elbow happened while he was reporting on his own in the Philippines. “I had finished all shoots. I was stacking up my cases. A heavy case fell on my forearm; it was a fluke thing,” he reflected. “By the time I got medical help in the Philippines, it was a little late in the game.” His left arm could not be saved.

Miserable in the hospital, he asked his doctor if he could recuperate in a hotel, which the doctor agreed to. “The first thing I did when I got in the hotel room was confront the keyboard with one hand and started writing my stories,” he says. Recalling that he had downloaded Dragon Dictate years earlier, he clicked on it and dictated his stories. “It was important for me to know where I stood,” he stresses. “I needed to answer some questions very quickly about whether I could be me.” At that point, he still hadn’t notified anyone of his accident. He was all alone.

“What I learned very quickly was that I was under the false assumption that seeking help from others was a sign of weakness. It’s the exact opposite,” O’Brien says. “My  counterintuitive discovery, having lost my arm, being alone in the Philippines, a one-man band reporting, afraid to call anyone after it happened because I was worried about their response — all those things….I was the on-your-own guy who didn’t fully appreciate the insight on what it means to connect with other people until it all happened to me. That was an important insight: that we’re not alone and it’s important not to think we are.” O’Brien says his girlfriend, Suzi Tobias, plays a significant role in helping him cope. “Suzi helped me figure out the hacks I need to enjoy my active lifestyle. [She] saved my life and continues to do so.”

Psychologists working in healthcare affirm that how individuals cope with conditions that impact their quality of life differs dramatically. Some people display a fight-to-the-end attitude that seems to thwart negative impacts, and others fixate on the condition’s effect on their life to the point that it accentuates the condition, as happens when too much attention is paid to tinnitus, which tends to make the tinnitus seem louder. O’Brien says people were flabbergasted that he didn’t take time off from work after he lost his arm. Clearly, he is the type of person who accepts a situation and figures out how to work with it. “Time to just sit there would have been so much worse for me because I would not have known [if I could do my job],” he says.

The accident helped O’Brien attune more to the notions of resiliency and grief. “I feel like grief is more like a spiral, [not stages]. It comes back around. It hits you now and again. There will be a moment — same with tinnitus. I’m frustrated by some activity of daily living that I can’t do so well and all of a sudden, it’s there.”

Being an amputee also means people are curious but often uncomfortable when they see him. “Tinnitus — to the extent that you can call it a disability — is completely invisible. And unless you have it, you don’t really understand it,” he notes. “People are weird about my arm. It’s a very visible disability.” He tries to put people at ease by being himself. “It’s not the center of my existence. But, ultimately, walking down the street, people stare at me. They don’t stare at you if you have tinnitus.” 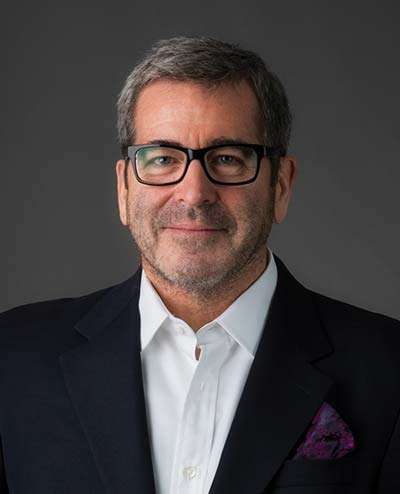 O’Brien’s life as a journalist is indeed his life. “I love my job,” he comments. And, like his tinnitus, work is always in the background. “It’s important to disengage, if you can, but it’s hard for me,” he says, explaining that he recently began meditating to try to relax. “I can do it a couple of minutes, then I’m thinking about the next deadline.” To hold his focus, he thinks about his tinnitus. “You’re supposed to think about stupid things anyway,” he jokes.

When he’s done meditating, he pushes tinnitus out of his mind and goes back to powering through another day, another story. “You have a choice of thinking about what you can’t do or modifying your life and trying to figure out what you can do and how to do it differently. So, maybe tinnitus prepared me for being an amputee. I don’t know.”

O’Brien looks off, and someone in the distance catches his attention. It’s time to start a new story.