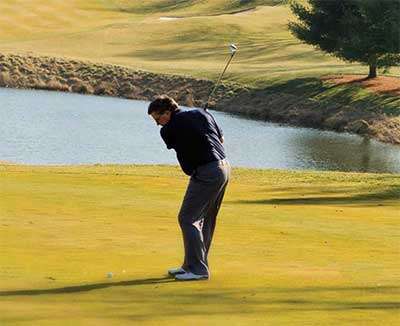 Imagine losing almost all of your hearing suddenly and irrevocably. Now add tinnitus into the equation at a nonstop, high-pitched 9,000 Hertz and 80 decibels. The tumult that would cause in your life is unimaginable for most of us. However, it is a reality for Randy Phillips, the Vice Chair of ATA’s board of directors.

Randy Phillips lost his hearing in 2008. “It was autumn in New York City, and I was taking some time off work between assignments,” he shared. “As my wife and daughter and I walked into a theater one evening, instantly—I mean instantly—I lost all the hearing in my right ear and a significant amount of my hearing in the other ear.

“I thought I had earwax—that something was plugging up my ear. I went to my physician the next morning and after 15 minutes, he said, ‘You need to go see this ENT, and after that go to this audiologist. If they tell you to go to an otolaryngologist, then see this one. You can do that fairly easy in New York City.”

“It was a whirlwind,” he continued. “All I remember is telling my doctor, ‘I’ve got tickets to the Lincoln Center jazz orchestra tonight, so can you just fix this and make it work again?’”

Phillips ended up at an otolaryngologist that same day for a series of unpleasant medical procedures, trying to find a way to restore hearing in his right ear. At the same time, he developed acute tinnitus in that ear.

The ensuing pursuit of a solution left Phillips—a successful corporate executive with a background in software and engineering—and his doctors stymied. During the years of surgical procedures and visits to specialists for his hearing loss, he discovered that there is currently no cure for tinnitus, even though it affects millions of Americans.

“We looked at it and tried to fight through it all,” he said. “We could not figure out what happened and finally, my otolaryngologist said, ‘Look, I think it is from a virus you picked up in China [after living there for two years], and you are never going to get your hearing back. So, let’s figure out what we can do.’”

Phillips said that the focus on his deaf right ear was so concentrated that he didn’t realize the full scope of his problem until he visited the University of Maryland—well-known for its work in audiology. At Maryland, he met LaGuinn Sherlock, AuD.

Dr. Sherlock asked me, “Has anyone ever told you that you have lost a lot of hearing in your left ear, your good ear?” I said, “No.” She said, “I think if we can help your hearing there, that will give you some way to get through life. Otherwise, you are just going to be struggling.” Dr. Sherlock’s help was significant.

As he processed this diagnosis and began to explore solutions, he discovered how little the broad medical community knows about tinnitus.

“I was looking around for solutions, and I was shocked how little clinicians, physicians, and specialists—otolaryngologists, audiologists—knew about tinnitus or, perhaps, what they could do to help fix it,” Phillips said. “I see tinnitus like any other major disease, such as heart disease or cancer; we need to invest now for the future, for the next generation.”

Tinnitus in general is poorly understood. Most people will experience ringing in their ears at some point in their lives. This is most commonly after loud events, like concerts. However, about 50 million Americans experience acute tinnitus. About 16 million experience chronic tinnitus and, of those, 2 million have severe and debilitating tinnitus.1

Phillips says, “That is a reasonable percentage of our country with this problem, but I can’t count on one full hand the number of research centers or research hospitals that are doing anything significant to try to help solve or manage this problem. I told my wife once that I wish that there was something sticking out of my ear so people would realize there is something wrong.”

The psychological effects of tinnitus can be devastating. Phillips compares it to living in constant pain, which can be debilitating at a psychological level.

“My wife and I have talked about this, because she has suffered through it with me,” he said. “I call it a phantom pain. Like someone who loses a limb, but can still feel it. For me, this ear is deaf, but it is trying to hear. It is pinging all the time… trying to hear. My brain is manufacturing this sound—this tinnitus.”

Phillips sensed he had a responsibility to be an advocate because of an encounter he had during his search for help. “Deep down I am an engineer (and) scientist, even though I am a corporate executive now. I want to help find the root cause and what can be done about it.” He cited a shocking encounter as spurring his desire to help find a cure or treatment.

“I went to one of the best-known hospitals on the East Coast, because I heard there was a physician there who was really good at tinnitus retraining therapy. The doctor I went to see wasn’t in, so they passed me off to another,” Phillips recalled. “I told him the problem. I kid you not, the doctor—an otolaryngologist—said, ‘Look, one of three things is going to happen to you: 1. It is just going to go away; 2. It’s going to be nasty for the rest of your life, and you will end up being disabled; or 3. It’s going to be so bad that you are going to kill yourself.’”

“I said, ‘Two of those three don’t work for me.’ I was shocked—this was a senior otolaryngologist at a well-known research center.”

For Phillips, who started with a bone-anchored hearing aid, known as BAHA, and moved to a cochlear implant, these aids have helped with his tinnitus. With the cochlear implant, he now has spatial separation of sound, which he didn’t have for seven years.

While medical treatment has enabled him to manage his condition better, he also finds that being outdoors playing with his dog or on the golf course helps. When he is outside, sound doesn’t bounce, and when he is focused on playing golf, the tinnitus is less noticeable. On the other hand, being in a noisy environment, like a restaurant or in an airport, is difficult for him.

“I call tinnitus a hidden condition, because when you look at someone, you have no idea they have this monstrous ringing going on in their head 24/7,” Phillips said.

“Hopefully, we will be able to find a cure for it, a way to remediate it or a way to train people to cope with it more effectively,” he said. “I hope to help the ATA continue with the solid work they have been doing and to help find a way to ratchet up awareness and education for both sufferers and audiologists.”

Phillip’s story mirrors the stories of millions of others living with this condition, who often experience a series of steps forward and back as they seek treatments and continually tweak techniques for ameliorating the incessant sound. His experience, enthusiasm, and business acumen are a valuable addition to the ATA leadership in our mission to find a cure for tinnitus.

1 As cited on www.ata.org/understanding-the-facts, taken from data derived from the 2011-2012 National Health and Nutrition Examination Survey, conducted by the U.S. Centers for Disease Control and Prevention.