An Emergency Left Behind 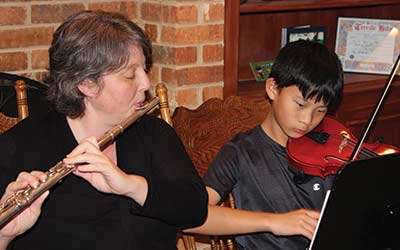 Sirens blared in the background, causing Tina Powis-Dow to lose her train of thought as she sat in her kitchen thinking about the day ahead. “All of a sudden, I realized it was coming from me,” she said, describing the moment in the fall of 2014 as a terrifying epiphany. The calm she had embraced after recently leaving a highly demanding job was gone in a flash, and she was suddenly filled with angst and trepidation. Tina immediately called her sister, who insisted that she see an audiologist as soon as possible. That first encounter with a health-care provider set in motion an isolated and challenging journey.

“You have tinnitus,” Tina relayed, thinking back on the appointment, which felt like a declaration of diminished living capacity. “What was I supposed to do? My first choice was trying medication that wasn’t really effective,” she explained. “Live with it” was the message she took away. “They knew better than I did, and I wasn’t advocating for myself in that moment.”

Without support or effective medical advice, Tina delved into finding ways to contain the siren blaring in her left ear, which masked the tinnitus in her right. “It’s two different tones that fight with each other,” she said. She found a degree of equilibrium through playing the flute, singing in choir, exercising, and meditation. “I had to figure out how to deal with the chatter,” she said. “I felt like I had a lot of academics, a lot of work, but not much useful (experience) to get me through this,” she said, as she elaborated on how writing and meditation developed into effective tools. “I started studying Buddhism and took a mindfulness course. I was trying to figure out how I was going to relate to the world,” she recalled.

That journey became far easier when her family relocated to Memphis, TN, where she met Dr. Casie Keaton, an audiologist who specializes in tinnitus. “I fell in love with her,” Tina exclaimed. “She walked me through my hearing loss and explained what it looked like.” Through Keaton, Tina learned that her tinnitus was like a phantom limb, with the tinnitus expressing the loss of hearing.

“She gave me a bunch of options,” Tina said. One suggestion that had an immediate and positive impact was Sound Therapy. Utilizing the Rain Rain app, Tina slept through the night, something that had evaded her since that first siren sounded over a year prior. For meditation, she settled on the Calm app, which she draws on throughout the week, meditating anywhere from three to 30 minutes. “They are free apps and give me quiet head space,” she said.

By reframing the context of tinnitus, Tina began the daily practice of non-attachment. “Because the noise sounds like an alarm, it would trigger fear. Non-attachment lets me think of it as an OK sound.” By attaching no meaning to it, Tina began to make peace with it. “I was feeling fear from this noise. I was assigning a meaning to (it),” she said. “I have the answers,” she said, explaining how she now listens to the noise and assigns a different meaning to it. “Tinnitus is more like my buddy,” she says, laughing.

Reflecting on the last few years, Tina describes it as a spiritual journey that has taken her from a place replete with fear to a state of calm control. “It’s important for people to understand what’s happening in their bodies and with their hearing,” she emphasized. “You’re going to create a story (about it), and you’re going to change it.” To help others take control and redefine the context of tinnitus in their lives, Tina and Dr. Keaton are in the first steps of establishing a support group in Memphis.