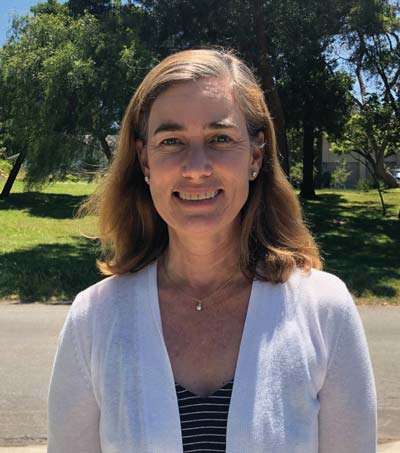 Two and a half years ago, a virus completely changed my life. It wasn’t named or feared or tracked like Covid-19. It was a normal bug, a common-seeming affliction, especially for someone like me who works as a preschool teacher’s aide. In fact, the only reason I sought medical attention while I was sick was because I was also experiencing a hissing and a sense of fullness in my left ear.

I was leaving for Christmas vacation in a few days and wanted to feel better before I left. The nurse practitioner I saw at Urgent Care told me there was fluid in my ear and prescribed antibiotics. No worries, just an ordinary thing. I had an enjoyable vacation, but once home — despite feeling better in general — the hissing noise in my ear persisted.

When I finally saw an ENT after the holidays and my hearing was tested, I was told I had experienced sudden hearing loss in my left ear, most likely brought on by a virus. I honestly didn’t have any sense that my hearing had been damaged. Moreover, it was so out of the realm of my thoughts that my hearing loss would be permanent that I actually wasn’t particularly upset upon hearing the news. I thought I would be prescribed something to fix it, and I would be back to feeling normal soon. Unfortunately, that wasn’t the case.

After several courses of steroids, antiviral medication, an MRI to rule out a tumor affecting my hearing, and finally an injection of steroids straight through my eardrum by a specialist, however, it was concluded that the virus had permanently damaged some of the hair cells in my inner ear. Nothing could be done to reverse my hearing loss and resulting tinnitus.

I learned later that with sudden hearing loss, time is of the essence and it should be considered a medical emergency, similar to if you woke up one morning unable to see. If treated with steroids within the first month of sudden hearing loss, the hair cells have a reasonable chance of healing and hearing can often be restored. Unfortunately, that window of time passed for me before I received the most aggressive steroid treatment, and my hearing loss and tinnitus are most likely a permanent part of my life.

The tinnitus I experience is a constant hissing — like the whooshing sound you hear when you put your ear up to a large seashell or listen to a white noise machine. It never goes away, but it does get louder and more intense with stress, anxiety, fatigue, and exposure to loud environments. When the tinnitus gets more severe, I often experience an ache in my ear, which may be hyperacusis, although that hasn’t been diagnosed.

When I first understood that my situation was most likely permanent, I felt tremendous regret and sadness. Because I might have been able to heal if I had been diagnosed properly in the beginning, I felt a level of responsibility for what I was going through. What if in the beginning I had seen my primary care doctor instead of going to Urgent Care? Would a doctor have recognized my description of the hissing noise as tinnitus, when the nurse practitioner had not? Why didn’t I realize that the fullness in my ear was hearing loss rather than just the by-product of being sick? Would I have advocated for more expedient and aggressive care if I had?

All these feelings of self-doubt compounded what I was going through. It took a long time for me to let go of the what-ifs and accept that I did the best that I could with what I knew at the time. I had no idea that a very healthy person could suddenly lose their hearing from what seemed like a common bug, so how could I have expected more of myself?

I think I’ve made peace with my situation, although, perhaps like all grief for things lost, I revisit it every so often. I let myself feel the sadness for a little while and then try to move on and get back to living.

My family has been very supportive and I can tell them when my tinnitus is acting up or I’m struggling with my hearing. I find fractal tones helpful when my tinnitus is particularly loud, so my family knows if they hear the chimes, I might be having a hard day.

I haven’t told too many people about my situation, and when I do it’s usually to explain why I’m having trouble hearing them rather than to let them know I’m suffering from tinnitus. I’ve found that it’s really difficult to explain to people what living with tinnitus is like. People seem to either glaze over when you are telling them about it or they tell you about the time they experienced ringing in their ears, so they get it.

It’s hard not to tell them that unless you live with this all day, every day, you really don’t get it. I know they are trying to relate and that comes from a place of kindness, so I try to receive their goodwill, even though it doesn’t always feel particularly helpful.

I stay active and busy, which helps my tinnitus take a backseat to other more positive things. I try not to think about having tinnitus for the rest of my life and instead think only about dealing with the day at hand. It’s an ongoing journey. And, though I still hope for a medical breakthrough that will eventually silence my tinnitus, I’m proud of how far I’ve come in dealing with it so far.

Yvonne Sopp loves her job working as a preschool teacher's aide with four-year-old children. She resides in San Diego, CA, and enjoys spending time with family, and traveling as much as possible.