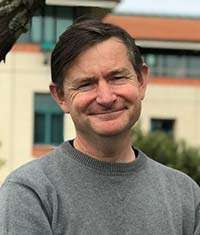 Dr. Searchfield has been an audiologist since 1994 and obtained his Doctorate in Audiology in 2004. He is the clinical director of the University of Auckland’s Hearing and Tinnitus Clinic, scientific director of Tinnitus Tunes, a tinnitus treatment website, and deputy director of the Eisdell Moore Centre for hearing and balance research. Grant is a primary investigator in Auckland University’s Centre for Brain Research and Brain Research New Zealand, a national center of research excellence. He is an associate editor for the International Journal of Audiology, Scientific Reports and Frontiers in Neuroscience and Psychology. Grant is well known internationally for his research investigating the use of sound and hearing aids for tinnitus management.

In addition to his tinnitus research he is the lead investigator in a major multisite trial of hearing aids as a potential method to slow cognitive decline, funded by the Health Research Council of New Zealand.